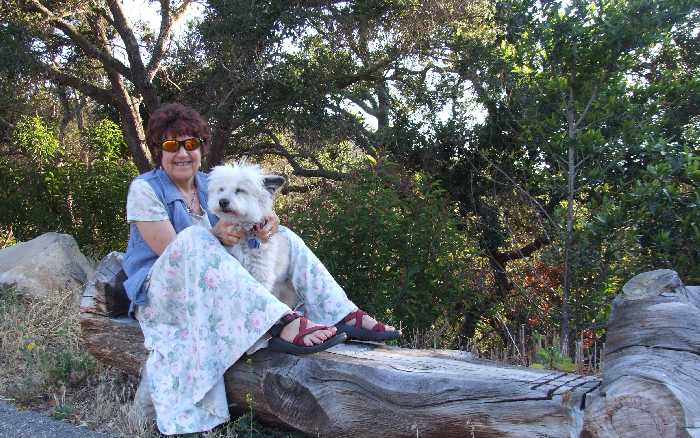 Jody and Annie at Skofield Park

This area has carte blanche on my heartstrings; I spent many, many days experiencing various epiphanies in my life in this pocket of Santa Barbara.

I do not remember the first time I went to Skofield, but it was likely a family/group picnic.  I may have gone with another group and camped there, as there was camping in Skofield Park.

There are paths and a large grassy area for playing, which is often filled with families and groups participating in various games, running about in this mountainous setting.

I recall being there some years back, on my way home from a school camping trip in which I had accompanied my then 10 year old son.  It was in August, and right in the middle of Fiesta Days.  My son and I detoured up to Skofield on our way home to LA.

We arrived at Skofield, and there was not a soul around.  I lounged on the warm grass, and listened to nothing but the chirps and rustles of nature.  I believe the entire city of Santa Barbara was either at the Fiesta Parade or out of town.  It was amazingly peaceful, and very special for me to have my child to share this with.

From Skofield Park you walk across Las Canoas Road to Rattlesnake Canyon.  There are two sides to start the hike; one requires you cross the creek, the other does not.  Depending upon how full the creek is and how adept you are at crossing full creeks will determine which side you wish to start on.

Back when I first came to Santa Barbara, there had been a huge fire the year before.  My introduction to Rattlesnake Canyon was hiking up the first part to a large oak tree (no longer there--it may have been dying and needed to be taken down), to the first creek crossing, then up a steep climb to what was referred to as 'the first meadow.'

That 'first meadow' is no longer a meadow--it is full of trees which grew over the years.  Continuing up the narrow trail, you are then above the canyon and can see that it is, indeed, a canyon.

As you walk on that narrow path, 'embedded' in the side of the hill is a rock that juts out overlooking the canyon.  Astonishingly, I used to sit there, drinking in the sheer greatness of it all.  I planned on doing just that on a recent trip up there in February, and was horrified to see how much of a climb down it was.  Suffice to say I most emphatically do not recommend climbing down and sitting there; it's a long drop to the bottom.  Instead, sit on the side of the path, or just simply stand there and smile at this friendly canyon that I have always referred to as 'my mountains.'

Walk awhile more and you start re-crossing the creek.  You'll walk past a large slab of a rock that slants down into a waterfall.  That rock was home base for me during many of my trips up there.

Continue on up, and this is the last, and rather steep, leg.  Eventually you will come to a very large meadow.  This was referred to as 'the second meadow.'  The challenges of various hikes are all relative to one's stamina and hikng ability; the second meadow was always a challenge for me, and I always rejoiced in my fortitude each time I made it up there.  As you face south, on most days, you can see a strip of ocean.  To your right is St. Mary's Seiminary.  To the left is a house which was not up there 'back in the day,' and which it looks like you only get to by private bridge.  The view from that home must be astounding and exhilarating.

You can hike across the meadow to the creek.  From there you can continue hiking up, which I have not done, or you can hang a left and take that trail.  It goes up a ways and forks; I always took the slightly uphill fork to the right.  You can hike that to the end of that.  A good website on hikes and the roads at the other ends of trails is santabarbarahikes.com.

I learned recently that Rattlesnake Canyon was named as such due to how the path 'snakes' around.  However, Southern California does have rattlesnakes, and Rattlesnake Canyon is no exception.  In my travels I have run into 3 of them; 2 in the same day.  Two were laying across the narrow trail (this was well above the 'second meadow.')   I threw a couple pebbles to see if I could get each one to move (I found them about 10 minutes apart).  Neither moved, so I announced loudly I was going to walk around him.  I doubted he heard, but I believe the vibrations from my walking at least did not make it a surprise to him.  At any rate, I walked by unscathed, save for a rather full flow of adrenline coursing through my body!   There are several links here which tell you what do if you see one, and how to practice safe hiking during 'rattlesnake season.'   Here are the links, though you can surely search for others: http://www.fishsniffer.com/guest/030630rattlesnake.html and http://en.wikipedia.org/wiki/Rattlesnake.

There is another trail early on in the hike (right about where the path first narrows) that takes you to a waterfall you can hike down to.  It's wonderful swimming, and the water is always cold and refreshing.

Some people like to hike up the creek.  This is a very challenging endeavor, though I've done it a few times.  I received a knee injury doing that, so be sure you have good traction on your shoes and are sure-footed.  It can be an invigorating experience.

Of course, bring plenty of water with you.  Years ago I simply brought a small pint-sized empty juice bottle and filled it at the creek.  Do Not Do This Now.  The water will likely make you sick and it is not recommended.  But back then, this was part of my the experience.   Things change!

If you take a dog, be sure you have bags to pick up the poop.  It used to be we'd leave it there--all kinds of animals poop.  See the section on dogs to see why picking up your dog's poop should be part of any ethical hiking.

Parking for Rattlesnake Canyon is on the street.  Years ago you could park in the dirt entrance, but that has since been blocked off by boulders, so it's street parking only.

Skofield Park no longer allows camping except for recognized youth groups.  And there is no camping in Rattlesnake Canyon.

Time for Skofield: 1-3 hours for picnicing, hiking about, lounging with a book, playing in the open meadow, strumming a guitar--whatever soothes your soul.

Time for Rattlesnake Canyon: Minimally 1 hour depending on your hiking speed.

Bring: Water, sunscreen/block, hat, snacks for the trail, poop bags if you have a dog (there are often bags at the trailhead, but not always), and wear comfortable hiking shoes. By the way: many let their dogs drink from the creek (myself included).  Those not comfortable with this should bring enough water and a small bowl for Daisy (or Frodo, as the case may be).