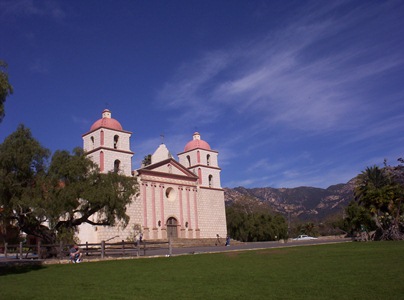 The Old Mission and Rose Garden hold special memories for me.  When my family first moved to Santa Barbara, we rented the house across the street from the Old Mission on Los Olivos and Laguna.  It is a wonderfully large three-story house.  The owners also owned a home in Gaviota, which coincidentally, was built by the same architect.

The yard to the house took up the rest of the block down from Laguna to Junipero Plaza.  The yard was owned by another who apparently was asking an exorbitant price for the property.  I have no idea of what it was, but the owners of the house were not interested in the purchase.  Eventually that lot was sold, and there is now a house on Laguna which was built on that property.

A gardener for the City Rose Garden also did some of the gardening for my family, and my mother used to invite him for iced tea and a snack. He was very kind, and would bring some of the roses from garden when he came over. I know he had several children, who would be grown by now.

This historical site is almost as synonymous for Santa Barbara as its beaches, and almost stands as a logo for the city.  There is a rich history of this mission, known as the Queen of the Missions.  Rather than attempting to fill you in on it’s history, better you should check out its website, which is www.santabarbaramission.org.  It is very definitive and worth looking over.  There is also a good article on Wiki at http://en.wikipedia.org/wiki/Mission_Santa_Barbara.

Across from the Mission is the City Rose Garden.  It is adjacent to a huge grassy area, and offers a most amazing potpourri of sight and scent, with the names of the various roses.  A walk through the rose garden would almost be a must as part of your ‘Mission Package.’

Beyond that, a little overgrown, is a meadow.  There are oak and eucalyptus trees and several paths to hike along.  It used to be full of bushes to hide and play in, but with the fire hazard up here, has been cleared out.  It still makes a wonderful sort of outback interlude to the manicured Rose Garden and lawn.

There are tours available through the Mission.  Prices change, so check their website for current information on this.

Over the past recent years, the crafts fair has relocated.  There were several reasons for this, but one of the main ones, that we have gleaned, is that sometimes the 4th of July falls on a Sunday.  The Mission, while a Santa Barbara icon, is first and foremost a church, and there was some conflict of a festival on the church lawn on Sunday.

For a few years, the fair was relocated a few blocks away on Garden Street. Since it's been a stretch of time, you may want to check on line for current 4th of July Craft Fair locations. It may have again been relocated to the Old Mission.

At Christmas time the Mission puts up a Nativity.  It is complete with donkeys and sheep.  It is the one time when you will have to leave your dog in the car, as the animals get jittery with the dogs.

For those that like to go to a midnight mass on Christmas, the Mission is a splendid venue in which to experience this occasion to a full extent.  Do know, though, that the pews fill up, so it is suggested you arrive early.  Fuller details should be available on their website (link is earlier on this page).

The sensation of bare feet on the Mission lawn is heavenly, but not advised during the spring; the bees are out among some of the ground flowers, and I was indeed stung during one romp-abouts as a teen.

While the mission lawn looks inviting to let your dog run freely off leash, do not do this.  People are ticketed for that, and a ticket while on vacation does put a damper on things.  There are some off-leash places for dogs in Santa Barbara if you want to go there.  At the Old Mission, keep you dog leashed, and clean up after the sweet critter.

Time to allow for the mission: minimum 1 hour, ideally 1 ½-2 hours if you want to really walk around the rose garden, hike about in the meadow behind it, and tour the mission.